I get a lot of feedback on the Beier systems mainly saying that they are difficult to understand and dont work for people, so I have decided to have a bash at dispelling that idea.

There are 3 main units and an infra red trailer unit. I will deal with the 3 main units first. All 3 have two power connections. The first is 5 volts for the logic. For the USM-RC-2 that is supplied from the ESC via the receiver, and the UFR1230 and SFR1 have onboard voltage regulators which supply the 5 volts to the unit AND to the Receiver.

The second is a "main" power input which is taken direct from the main battery. The USM-RC-2 and the UFR1230 allow the power input to be from 5 to 14 volts and the SFR1 is a little bit higher at 16.8 volts. For the USM-RC-2 this means that the ESC MUST be on in order for it to work.

The USM is the most basic unit, it requires power from two sources. Firstly it needs 5 volts for the logic which comes from the ESC via the receiver. Secondly it needs main battery input. Main battery input goes to the top two connections on grey connector block. the top one is the positive (via the supplied red lead with inline fuse) and the second is the main battery negative. continuing down this connector block. 3 is an optional control for the engine sound. 4 to 7 are inputs and can be used to trigger sounds or actions. connection 8 is out + this is the main battery output for the output devices (leds, smoke units, relays etc). 9 and 10 are optional outputs 11 and 12, you can choose to have these OR the two servo outputs active ( one or both), if servo output is selected they have the servo signal on them, if they are configured as outputs then it is controlled by the output (0-100%).

There are 3 lots of two pin connectors, the white ones are for lodspeakers one each for each of the onboard amplifiers.

N.B. these must not be connected together in any format.

the two pin connector marked lautst. is for the optional volume control, I strongly advise that you use this to control the volume, there are other ways but they eat in to what you can do!

Channel four can also be set to take Sbus or SUMD inputs this can expand your input to 10 channels! I would recommend that you do not use 1-4 on sbus as sbus outputs are "futaba" style so for example if you are using orange rx sbus capable receiver with a Spektrum TX  in mode one, the the throttle is on rx output 1 but sbus channel 3 - confusing as hell! Having said that if you have a 9 channel set then feel free to ignore my comment re steering. I would use standard proportional channels for throttle and steering as they are viewed as being more secure...

At the middle bottom are three more sets of servo connections. The left hand two sre for servo outputs and the right hand is for connection of the IR diode or the EXM expansion module.

On the right is a 10 pin connector for the flat ribbon cable, it has a keyed connector so will not fit backwrads. The ribbon is colour coded with standard colour codes for numerals. brown (1), red (2), orange (3), yellow (4), green (5), blue (6), violet (7), grey (8), white (9) and black (0 or in this case 10). These are all negative switching outputs and can be used for e.g. small relays, LED's, smoke unit controls etc. ( The positive supply comes from the grey block connection 8.

N.B. There is no current limit on these outputs and current sensitive devices (e.g. LEDs will need resistors in the circuit).

Finally there is a flat slot that takes the SD card. The sd card has the programming for the unit it is generally supplied with a basic project, you can load any basic project into the soundteacher application in order to see what is where ( subject of a later article). The Sd card can be removed for programming OR it can be programmed via the K-USB programming adapter. 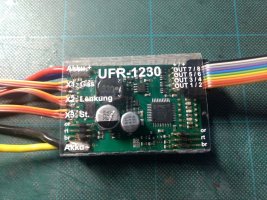 The UFR1230 is in many ways the simplest unit in that it is a spead controller with one extra control channel. It has three servo inputs X1 Gas (Throttle) X2 Lenkung (Steering) and X3 ST ( control channel)

The UFR1230 requires power from the main battery and this is supplied vai the red and black leads (red +ve) and max 14 volts or 3s lipo. Below the three servo leads there are two servo outputs, the top one is for the sterring servo output and the bottom is for an optional connection to a sound module.

Bottom right there are two more servo outputs, the top one is for the IR diode and the bottom for connecting the usb program lead.The UFR1230's memory is onboard and can only be accessed via the USB program adapter. 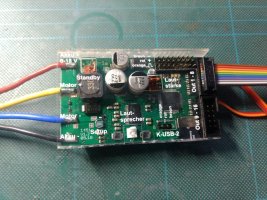 The SFR1 (pictured above) has two servo leads , X1 Gaskanal is for the throttle and X2 Lenkung is for the steering - either of these will supply the logic voltage to the unit from the receiver. The power from the main battery goes to the red and black lead that has a deans type connector on it. At the same end of the unit are a blue lead and a yellow lead. The yellow lead is motor +ve and the blue is motor -ve. As an aside you can reverse the motor direction by setting it in the controls (more later).

There are 3 two pin connectors. The brown one on the left allows for the addition of a switch that can put the whole unit into standby and thereby reduce battery consumption. The brown one in the centre (Laut-Starke) is for the connection of a volume control. Both these are optional! The third connector is white and is for the loud speaker (Laut-sprecher).

There is a single 3 pin servo type lead marked K-USB-2, this is for connecting the programming lead.

Top right there are two groups of servo lead connectors, the left most four are for the control inputs and are from left to right prop 3,4,5,6. The right hand set serves multiple purposes. The left most two are servo outputs servo 1 and 2, these will drive a standard servo for eg fith wheel, gearbox, turret etc. next is the output for the steering servo and finaly the output for the infra red sender diode.

N.B. There is no current limit on these outputs and current sensitive devices (e.g. LEDs will need resistors in the circuit).

Finally there is a flat slot that takes the SD card. The sd card has the programming for the unit it is generally supplied with a basic project, you can load any basic project into the soundteacher application in order to see what is where ( subject of a later article). The Sd card can be removed for programming OR it can be programmed via the K-USB programming adapter.